Both of us have roles in the new podcast fiction story, Wiener Blut, a modern fantasy tale set in Vienna against a backdrop of murder, mystery, another world and coffee, lots of coffee.

Music from Difficult Second features in the podcast Mick co-produces with Katharina of Wiener Blut. Every Photo Tells… is a short story podcast based on monthly photographs.

Sean’s blog ‘From Broughty Ferry to Brokenness‘ has moved to the ‘Best Thinking’ site, where you will also find his recent collaborative work with artist Greg Carter, which is called ‘14 Cages‘. Essential reading for Lunacy Board inmates.

Doug Boucher, bass-player, writer and Lunacy Board collaborator was taken from us on 13th December 2009. He wrote and performed the lead bass part that became “Xenochronous Requiem For A Head Laying In A Field In Butler” and we had looked forward to working with him again in the future. Buy the ticket, take the ride, Doug.

Visit the new ‘Spin-Offs‘ page for details of Sean’s writings “From Broughty Ferry to The Boulevard of Brokenness” and Mick’s podcast fiction “Some Other Scotland”.

Mick and “The Furfurescent Choir” have created a song for this year’s Comic Relief effort, via Red Nose Net – an internet-based group promoting Red Nose Day outside the UK. The song is called “Big Red Nose” and will be featured within the video webcast which will be running all day on 13th March 2009. 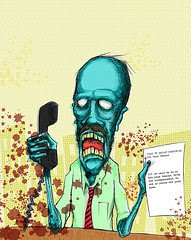 Mick plays bass on the debut release from the Jonathan Coulton covers band, “The Mandelbrot Set”.

All three albums are now available as digital downloads. As well as the free ‘Difficult Second’ album, ‘Eponymous Debut’ and ‘Stockholm’ can now be downloaded, either as complete albums or individual tracks. You can listen to short clips of every track before downloading.

Direct links to each album download are on the Albums page, or by clicking the logo below:

Mick takes on the ‘Masters of Song Fu’

Mick is one of 13 songwriters competing against Jonathan Coulton, Paul & Storm and the RiffTones (of MST3k fame) for the elusive title of ‘Master of Song Fu’. Follow his progress on his blog at mickbordet.com.